I like heading into Banff after a hike or bike ride and getting food, hanging out in the library, or wandering the art galleries. But as I'm wandering the streets and back alleys, I can't help but feel the huge impact that the Town of Banff makes every day. Just the 9000 people who live here make a profound impact, not to mention the thousands of visitors a day that arrive mainly by motor vehicle. The momentum is hard to stop, or even to slow down, as visitors create the need for food, parking, curios, art, clothing, alcohol, hardware, and entertainment, and those who provide those things need plumbers, dog groomers, lawyers, medical services, and many other things. When will it even slow down? What is actually a necessary service in Banff? And who can determine this?

This is where Banff is now. Where will it be in the future? What would be regarded as a successful outcome for the town of Banff? As I wander the streets, I'm well aware that I'm contributing to this town by being here. And it makes me think...

The Cascade pools is a nice place to hang out. It's got picnic tables, paths with bridges to walk over, streams that you can dam and get across, and fields you can nap in. It makes one feel like he's in the middle of nature... until the pools dry up in the winter. It made me ask where the water came from. That's when I found out that the river that used to be here was diverted to the Cascade Canal, which is directed down two comstocks to generate power. Of course, that made me really wonder what was here 100 years ago. I found a photograph taken from Sulphur mountain which showed a much larger Cascade river running into the Bow Valley where the highway currently runs. 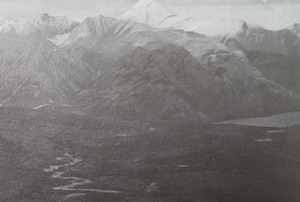 It snowed the day before I went to the pools with my camera. I decided to go anyway. Wandering down the river was nice, until I got to the Trans Canada Highway bridge, where I was jolted back to the reality of what happened here. The river, once free flowing, now subjected to engineered channels, pools, and culverts.

Of all the buildings at the Banff Centre for Arts and Creativity, the Kinnear Centre for Creativity and Innovation is the most prominent. It sits pretty much in the center of the campus and rises 3 stories above the hillside. The first time I saw it and read the name, I saw the disconnect. My first impression was "prison," and wondered what went on in there. But it also dismayed me that with this building, the Banff centre had become so large. Did the Banff centre "build it so they will come"? And have they used all of that space for creativity and innovation?

It turns out that they haven't. All of the 2020 layoffs prompted an open letter from some staff to implore the leadership to get back to its roots. Apparently, in order to make use of the building, leadership seminars fill the large part of the schedule and square footage. That's why this building is so interesting. I think it represents the notion that an institution must grow in order to remain viable. But when institutions grow, they require more resources and consume more.

I took the first photos with the Polaroid using paper negatives, then returned with the large format camera, then later with the Olympus OM-2. It's hard to capture the impact of this building in pictures. I wanted to give a sense of how imposing it was, so thought a strip of negatives would help.

Go to the Kinnear Center

I went looking for the Anthracite mine today. From Johnson Lake a foot path heads down by the river toward the highway. Across the river I noticed what looked like a mine entrance shrouded in thick moss. Scattered nearby were lumps of coal and jumbled rocks. Another possible entrance was lower down but it may have been too small to be one. I headed down the river and encountered a sign stating, "Reserved for wildlife. We ask for co-operation in not entering theis environmentally sensitive area. The Fairholme Benchlands is important habitat for wildlife. It is the last remaining block of undeveloped mixed forest and grasslands in the Bow Valley."

I'm never sure what to do when I see a sign like that. There was an animal path leading East, so I carefully followed it for a short distance only to notice a pipeline surface out of the ground to accompany me. Further ahead I noticed three long piles of... coal? Yes, slack heaps--coal that wasn't marketable was piled up here 100+ years ago and left to become part of the landscape. Two piles had small trees growing in them, but the middle pile was bare--a toxic pile of coal that will probably remain bare for another few hundred years. Up the cliffs Johnson Lake is dammed, making me wonder how much smaller it was before the 1880's. And the path around Johnson lake is made of waste coal, most likely an inexpensive way of creating a path that doesn't grow anything. I made me wonder how the sign could say, "undeveloped mixed forest."

The actual town of Anthracite was demolished when the Trans Canada highway was put through, with very few remains. I went searching for some remains east of town, south of Cascade river below the sandstone cliffs and found what looked like a foundation and 4 inch pipe which could have been for sewer. There's also a sign nearby asking people not to disturb the area because it may have been a burial ground. I tried to head toward the main town site, but I would have to cross the Cascade river, which was pretty wide there.

I took a few pictures on the Polaroid, folded up the tripod and noticed my hands were dirty from coal tar. I walked slowly back to Johnson Lake, trying to imagine what it was like 120 years ago, when 300 people lived here mining coal. Looking around, I couldn't be sure what is natural and what had been altered by mining. I realized this isn't what Banff was, but this is Banff now.

I went to the Banff Centre to try out developing paper negatives in the field. Equipped with a Polaroid 450 camera, a dark box, paper, and chemicals, I drove to the Banff Centre and decided to park in the parkade under the music centre. But as I got out and looked around I realized that I was far removed from the national park. So I loaded the camera with paper in the dark box and took my first picture of the entrance. After loading the paper into the developing drum and pouring in developer, stop bath, and fixer, I pulled out the first negative and was both excited and a little disappointed. The field developing process worked great, but the scene had way too much dynamic range, so the entrance was blown out and there was no detail inside. But I was still excited to see the negative right away. It was almost like taking a Polaroid picture except instead of "pictures in a minute," it was "negatives in 3 minutes."

So I tried to compose scenes without as much dynamic range and was pleased with the results. I tried a couple of self portraits, where I'd open the shutter and run into the picture for a couple of minutes. The first one worked, but the second one was backlit, so part of my back went missing in the result! During that time in Banff, I never left the parkade. I lingered, pondering this place, thinking about how our society created the need to build it.